The Face of Woman

After years of designing decorative painting and murals to my clients specifications and desired subject matter, I used a break between jobs to get back to creating paintings from my own interests.. primarily women’s faces. This composition of the “Three Ladies” was inspired from 3 magazine clippings I found in a box of images collected over many years with intentions to incorporate them into works of art (which until that moment had never actually happened). I was drawn to the mystique of these women and the complexity of their expressions. Each one revealing only what she wants you to know, while concealing the entirety of her true story deep behind her pensive eyes. There is pain, but she exudes the strength it has created. There is fear, but only the courage it brought forth is seen. There is struggle, but it is solely compassion and wisdom that she shows. As they unfolded on the canvas, I sensed where their lives had taken them and who they had become. I admired their resilience.
I became so mesmerized by the lady in lower left corner that I wanted to envelope myself in her character~ I wanted to wear her; be her! She was the catalyst for my desire to evolve my art into Art-to- Wear (a concept I continue to explore).

In the meantime, she became the representative  on my business card as an aspiring self portrait. Interestingly I noticed that I felt more confident handing out these cards (my third redesign since the conception of my business in 1994) not only for the work it illustrated, but the qualities of the subtle enchantress that I felt myself embodying as I allowed her to captivate my potential clients. People even began asking if it was me, and I explained how that was my intention.. to become her.
She has been my ‘spokes model’ for eight years, until I finished my actual self portrait this year. I thought I might be better served representing myself and the more work I am currently creating. Though I was completely unconscious of the similar expression of the photo I referenced for this piece, my portrait and consequently my new business card is nearly a mirror image of the woman I set out to be! 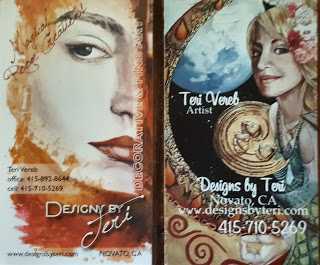 I suppose she served as a vision board for me over all of those years! I absorbed her essence, and as I lived MY story through trials and tribulations, found all that I saw in her, the self confidence, the assuredness, the grace, strength, and elegant seduction within myself. It was my theory behind the drive to adapt the women in my paintings into clothing, fusing your attitude with what (or whom) you are adorned!  And now on a similar level, it has been proven true.

As I proceed in my pursuit of artistic clothing design, I ask these questions to my audience:

I would truly appreciate your comments or feedback!