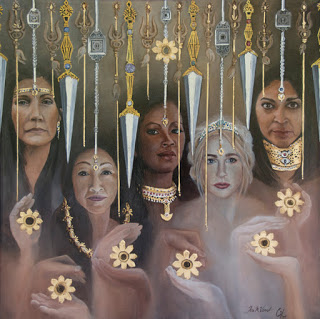 To the powerful, incredible women of the world, all mothers in some respect, I created this painting, “The Force”, for you. The following statement came through in the final day of painting:

I am a woman. I am a Force to be reckoned with. I have the capacity to love beyond physical measure. I am resilient and resourceful. I was chosen to bring more of our species to this planet. It was a gift I was given, and a gift that I give. It is through my body that life is created and it is my choice when or if I will endure the process to offer this gift. It is my body, and no one else gets to decide what I do with or to it. No one gets to say who I love with it. No one gets to limit what I am capable of doing or becoming. I have only myself and my God, not anyone else’s version, to answer to, and my highest self to strive for. How has any conversation to the contrary ever been entertained? How, after millions of years on this planet, are any human beings having to fight for their worth, their equality to any other, their domain over their own body, or the right to be anywhere on this planet that we all have been given to inhabit?

We, as a species. are an embarrassment. Those within this species that question or judge others within the species do a disservice to the human race. That we battle over which humans are right/ wrong, good/ bad, worthy/ inferior is blasphemous. If God was anything but unconditional, infinite love, It would surely be ashamed that It’s most highly gifted creature assigned to this particular planet , over a million years inhabiting, hasn’t figured out something more beneficial to do with it’s time, energy, mental capacity, creativity, and curiosity than selfishly fight amongst itself. Insulted It would most certainly be that this creation is more obsessed with holding down or destroying others than it is encouraging and supporting the advancement of its kind and development of its untapped capabilities.

And perhaps humiliated that this behavior is demonstrated when the planet is still thriving, and there is no need to compete over depleted resources. God would probably question those who considered Women, the ones entrusted to continue creating It’s creation, lesser-than in any way. I am a Woman, and I more powerful than anyone can imagine. I will stand with my Sisters and uphold the Highest Good. We are The Force.