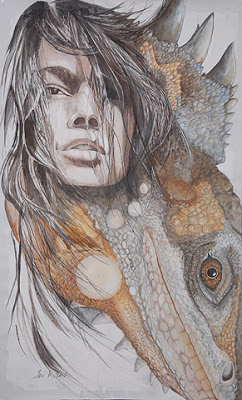 This painting represents the full immersion with one’s spirit animal…not just receiving guidance but becoming the qualities embodied by the sacred teacher.

I created this painting years before I actually experienced my own immersion. Though I had always had a sense of my spirit animal being the Dragon, I simply felt it as kin being born in the year of the Dragon and generally being drawn to them. I did not really sense a relationship, but I did have a sense of pride being related to such a complex and majestic creature. It wasn’t until last year while in the ‘graduate level’ class of  Integrative Quantum Medicine, that I confirmed that the Dragon was actually my Spirit Animal. It was not a huge discovery since I had always assumed my affinity for them was based in that fact.
Days later during an unrelated session of class, I became the recipient in a healing demonstration. The process I went through became much more intense than I could have imagined from the minor issue with which I began the exercise.

I was overwhelmed with the uncomfortable feeling of taking up too much time with my roblem, and needing all the extra efforts of the participants. Flashes from the past revealed how I had never allowed the condition of ‘needing from others’, and what I took on in my life to avoid that feeling.

The weight of all that I had burdened myself with became so real in my body, and I literally could not get off the floor. I struggled to roll over to push myself up. Someone had to support me to get me to another room to recover from the emotional release.

The process of letting go of the shame I had built up around needing help continued to pour through me weakening any strength I had in my physical body to stand on my own. The instructor came back to help expedite moving the energy out. As I was bent over, my knees buckling in the outpouring of grief for what I had put myself through all of my life, I suddenly felt a stiffening in my spine  that brought me upright. I felt like wings had sprouted from my shoulder blades shooting up over my head and down to the floor. An image like Angelina Jolie’s Maleficent flashed through my head, and a wave of strength immediately calmed my hysteria. I looked my teacher in the eye and with sudden composure I said, “I’m good.” She said, “Yes you are!” and we walked down the hall to join the others. I felt so large with these massive wings pulling my chest back that I was stomping into the room. The group went directly into an energy release circle where I actually let out a roar! I felt the Dragon inside me; I felt me being a fearless Dragon. I was empowered with the Dragon’s strength, wisdom, and confidence filling the space where insecurity, meek minded beliefs, and quiet struggle had lived.

Over the year since I claimed my Spirit Animal, I witnessed a dramatic change in my attitude, and a series of challenges unfold that seem designed  to push me out of playing small. My wings have become a natural part of my being and when I need extra protection, my mantra is “Wings Up!” and I am shrouded in the invincible cloak of my magical dragon wings.